Fantastic MediaWikis all over the place 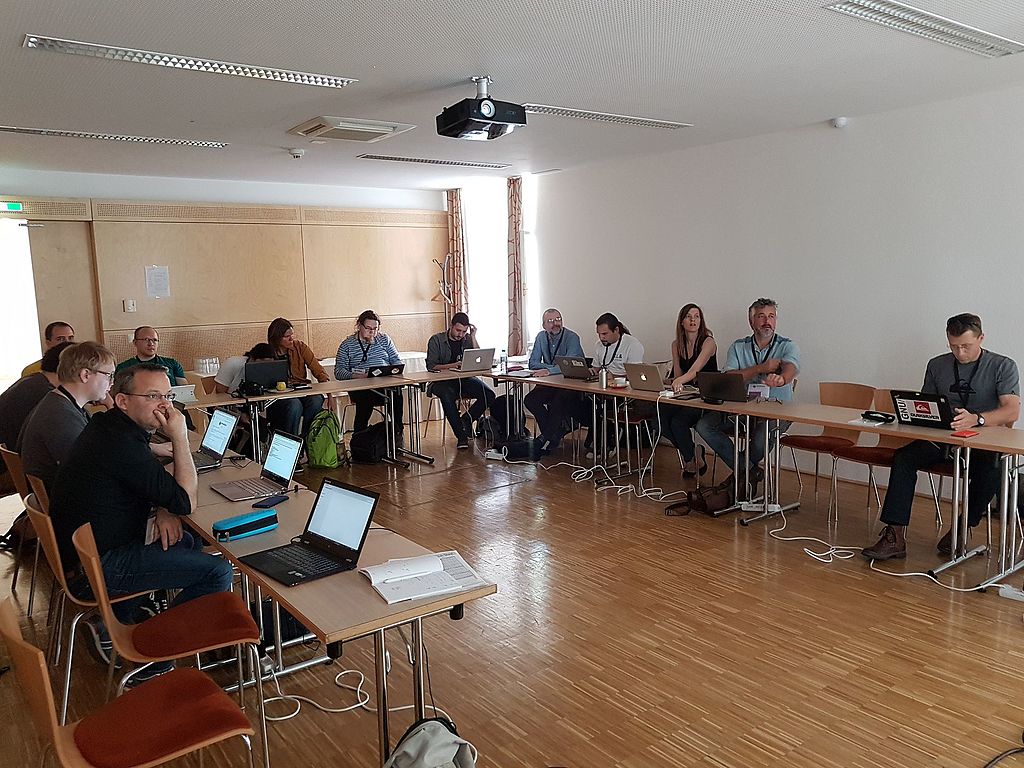 This was a long cherished plan for the MediaWiki Stakeholders: curate a track at a MediaWiki Hackathon which entirely focuses on MediaWiki sites and their maintainers. With the help of Wikimedia Austria we were finally able to realize that plan at the Vienna Hackathon 2017. MediaWiki practitioners all over the world followed our call for participation and helped us create a track which covered a wide variety of topics.

In his keynote, Mark Hershberger summarized insights from a set of interviews he had conducted with MediaWiki users. Notably, users seem to have a great passion when working with the software. Also, Mark comes to the conclusion that third party users of MediaWiki want knowledge sharing, not knowledge management.By using the software, the values of Wikimedia are brought inside the organisations.

There is no doubt MediaWiki is a great piece of software, but how does it score against other wiki engines? This was explored by Richard Heigl, who compared MediaWiki and Confluence in terms of features. Quintessentially, Confluence is better for small teams, as it isolates collaboration spaces, whereas MediaWiki is designed for integration and sharing of knowledge across an organisation.

Have you ever wondered what a street or a building looked like some years ago? With baugeschichte.at, introduced by Martin Brunner, you now can do this at least in some cities. Based on Semantic MediaWiki, pictures are displayed in a map and can be ordered chronologically. There is even an app, so you can access the information about the buildings you see when you walk along.The wiki uses movable items in page forms and allows for image uploads from within the form. Developments on the platform are fed back to the community.

The Vienna History Wiki is another example of successful use of a Semantic MediaWiki instance. Bernhard Krabina is a long standing advocate of MediaWiki and SMW which he thinks supplement each other very well, as you can add structured data but still have your “chaos part”. Interestingly, the wiki is externally audited for security, so any extension you find there is extra approved.

It is even possible to build a quality management system with MediaWiki and SMW that fulfills the requirements of standard norms such as the ISO9001:2015. Michael Barylak has set up a prototype at ESA. While not yet in production, he was already able to show that auditing, reporting and querying his system is easy and comes with almost no extra effort once the data scheme is set up.

Niklas Laxström from translate.net shared his substantial experiences in running MediaWikis. In particular, he has developed solutions for safely deploying changes from a test to production environment and baked this into a software called Oregano. Furthermore, there is a solution to run the background jobs of MediaWiki more stable at a higher frequency by using a service instead of a cron job.

Transferring data schemes (ontologies) from one MediaWiki to another one can now be done in an automated, reproducible and auditable way thanks to Lex Sulzer. Needless to say this also works for other kinds of content synchronisation between wikis.

Putting on his novice user hat, Markus Glaser from BlueSpice was delighted to see how easy it is to install and configure VisualEditor under Windows. He shared his installation path and showed ways to run VE in a distributed or local environment.

In a separate session, Renate Nuppenau worked with new MediaWiki developers to enable them to contribute code. Her main intention was to lower the barriers for contribution.

How can we promote and strengthen the position of MediaWiki? This question was explored by Sabine Melnicki (WikiAhoi), Brion Vibber (WMF), Richard Heigl (BlueSpice), Bryan Davis (WMF) and Mark Hershberger (Nichework). There were some key findings in the discussion: it is vital to make a substantial RoI proposition for the case of supporting MediaWiki by the Foundation. Furthermore, the idea of starting with a community edition of MediaWiki was seen very positive. And finally, 3rd party users need to be more visible in the community. This is something the MediaWiki Stakeholders can take care of.

Overall, the experiment to have a MediaWiki maintainers' track at the Hackathon can be considered a success. Over the course of the day, we had 30 individuals participating in the sessions, with a concurrent attendance of 12 to 18 people. There were 11 presenters.

Special thanks go out to Sonja Fischbauer and Claudia Garad for approaching us and helping to realize this event. Markus and Richi are particularly honored to have received a special mention during the opening ceremony.

If you want get some impressions of the hackathon, there's a category at Commons: https://commons.wikimedia.org/wiki/Category:Wikimedia_Hackathon_Vienna_2017_%E2%80%93_Fantastic_MediaWikis